Artistry and Innovation in Everything We Do

Paul Bond is a Kansas City native. He attended Winnatonka High School and has been in the remodeling and general contracting business since he was 17 years old where he first learned to frame a house. This knowledge enabled him to “know the bones of a house and how things are supposed to fit together.” Asked how old he is now, Paul says he’s 25. Paul may not be telling the truth about his age but every other subject he talks about reeks of honesty.

A younger Paul learned how to do all of the skills he now oversees others do by observing and making notes in a book that became his ‘how-to’ book. At the time, the older construction workers would make fun of his book. If they could see the way, he goes about his work they wouldn’t be laughing now. He can see what is wrong with the wiring or plumbing in a house. He knows exactly how a job needs to be accomplished- the right way.

Two years later, at 19, Paul started his contracting company and ran that for 15 years. He spent the next chapter of his career overseeing 16 crew members for another contractor with high-end remodeling projects specializing in home additions and building custom homes from the ground up. He was doing that when the downturn in the economy came a few years back. The lack of available work robbed each one of what they loved to do. As fate would have it, it was part of his path to Artisan. 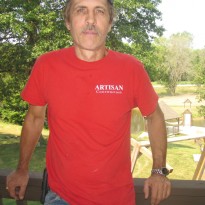 Paul found Chad and Artisan Construction through an ad online. A solid partnership has formed. Paul enjoys the type of remodeling and general contracting projects that Artisan Construction does. He likes Chad. He likes working with him. He said if he didn’t like Chad, he wouldn’t be working with him. He enjoys his personality and ability to grow with Chad in the direction his company is going. Paul is eager to share his experiences with Artisan. I addition to Chad; he brings another solid set of hard working values coupled with the attention to detail and excellent craftsmanship that is the signature style of every project Artisan Construction completes. When that happens every one benefits from doing business this way.

Paul has three children. He named a son, James. James Bond. (Yes, he did.) He looks to work for Chad until he retires. Until he does retire, he will be making sure that the remodeling and contracting work that Artisan Construction does under his supervision, continues to be done with an artist’s eye, the proper way, with an unrelenting attention to detail- by the book.

©2016 All Rights Reserved. Website by Nebraska Digital. Marketing by A2 Online Marketing